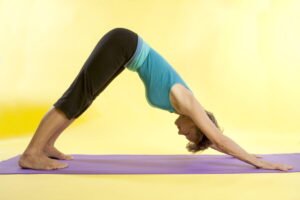 The practice of yoga can become addictive for some people, especially those personalities who have that little bit of a tendency to get obsessive about things, like me.
When I discovered Iyengar yoga in 1979, sometimes I would do more than one class a day. I would definitely be at the studio every day (except Sunday), and I even did a yoga teacher training course only five months after my first class. The course went for six months. Each session started with an hour of pranayama, followed by two hours of asanas, five days a week. Saturdays I would be at the studio again.
I won’t tell you I slowed down after the course finished. I assisted my teacher for three years, travelled to the U.S. with him twice, and was there to support him at all his seminars and intensives.
During the most fervent period of training, I used to do yoga in my sleep. I don’t mean that I was physically getting into the poses, but in my dream self was going over poses I’d learned by doing them in my sleep. I can’t remember the exact results of these efforts but it must have been exhausting.
I learned a lot. I believe there’s a narrow line between passion and obsession. I don’t know where I was along that line, but I’m still here loving yoga.
I was surprised to read in my Sutra studies tonight what B.K.S. Iyengar had to say in Sutra I-38:

The sadhaka (aspirant) begins his sadhana (practice) dreaming of the pros and cons of each asana. This a svapna (dream) state. He stabilises his ideas and rests on them. This is nidra (sleep) state. Later he learns to distinguish the subtle points and perform them with awareness. This is the state of jnana (awareness).

Apparently I was doing just what the sadhaka does in this sadhana, but I never knew it until now.

Or by recollecting and contemplating the experiences of dream-filled or dreamless sleep during a watchful waking state.*
*Light on the Yoga Sutras of Patanjali, B.K.S. Iyengar