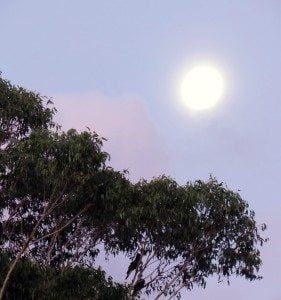 When I lived in the city, I would mostly be unaware of where the moon was in its monthly cycle. Occasionally I would make a special effort to find out by looking in the newspaper or on-line. But it was hard to get a visual read because of buildings in the way or the smoggy atmosphere.
Here on Mitchells Island, the night sky can be a heart stopper. On a crystal-clear night it’s easy to imagine being able to reach up and scoop out handfuls of stars.
At the beach today, I could see from the extremely low tide that some big energy was looming. And then I remembered the waxing moon of the night before.
This Sunday at 1:30 p.m. in Sydney, NSW, the moon will officially turn full. Twenty-five minutes later the moon will also arrive at perigee, its closest approach to Earth.
The two events occurring together is a stunning skywatching sight called the “supermoon.”
The Moon has not been this close to Earth in about 18 years, which will allow skywatchers around the world a chance to see a really big moon. The result will be a 16 percent brighter-than-average full moon accompanied by the sort of unusually high and low tides that I observed.
If you’ve been invited to a full moon party, be prepared to howl!

The moon is brighter since the barn burned.
Matsuo Basho