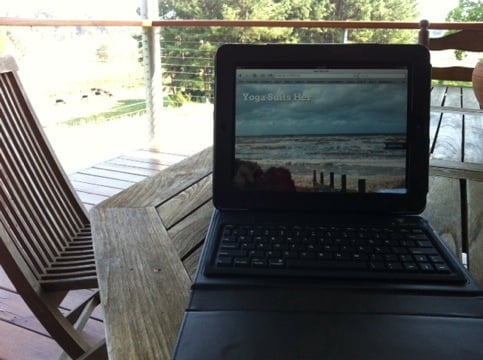 Eve’s technology landmarks:
•Encountering the internet in the USA in 1994 and thinking, gee, that’s cool, I wonder what it can do.
•Getting my first computer, a Mac, in 1996 so I could use the keyboard to write my book, Teach Yourself Yoga. (Email, a curiosity then, later became for me a sort of cyber umbilical back to my overseas sisters.)
•Being one of the first Aussie yoga school directors to launch a website, simply yoga.com.au, in the year 2000.
•Being among the first wave of iPhone owners.
•Blogging continuously since 2007.
•(Today) Using an iPad keyboard. (Thank goodness for predictive text.)
If the above list sounds like I’m bragging, I apologize. Actually, I’m rather surprised by my measured embracing of things technological. Many of my peers and colleagues have been quite resistant to computers and the internet, and perhaps missed out on the way they can connect us to each other.
I’ve been very fortunate in having my computer guru Daniel guiding me, as he’s a great model for having curiosity about and enjoyment of technology.
What’s the point of resisting the march of progress anyway? As in yoga, resistance will only create tension and perhaps limit our freedom.
I love the wise words of writer Maya Angelou:
“At fifteen life had taught me undeniably that surrender, in its place, was as honorable as resistance, especially if one had no choice.”