What’s a yogini doing in the wine country of California?
Enjoying herself.
We were very privileged and honoured today to enjoy an impressive tasting of wines at the vineyards in Napa, California founded by Donald Hess. A Swiss entrepreneur, Hess’s sustainable wine producing practices subscribe to the idea, “Nurture the land; return what you take.”
We four were modest in just visiting one winery, and then rather sensible, I thought, in going out to eat in town.
One of my yoga practices that translates so well when traveling is the namaste salutation. Obviously, one would be considered looney to be bowing to people with hands in prayer position throughout most of western society, but it’s the mental/emotional part of that greeting that is the most important ingredient.
Seeing strangers as though they are expressing the god within immediately makes them kindred spirits.
I had the pleasure of meeting Ariel tonight at Bistro Sabor, his Napa Latin American “quick service restaurant”. He has a food ethos that includes delicious, passionate and satisfying. He also has some cool tats from his political sensitivity that include script in Yiddish, Hebrew, and Arabic. Sanskrit, he tells, me is next.
If you ever pass this way check Bistro Sabor and Ariel out:
http://www.bistrosabor.com/ 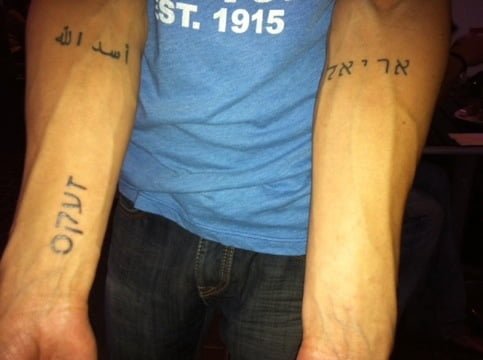