I’m on the opposite side of the continent from the battered U.S. Eastern seaboard, afflicted as it has been by Hurricane Irene. I’ve been sheltered for the last two days in the Olympic Wilderness area of Washington State.
My awareness has been opening to include the destruction, even death, on the East coast, even as I take in the awesome magnificence of where I am at the moment.
As a launching pad for appreciating the one-million acre Olympic National Park, I am lodged at rustic Kalaloch with it’s expansive sandy, log-jammed beach. There have been so many first sightings. The other day on at Ruby Beach, I discovered a marine feature I’d never seen before called a sea stack. (Imagine haystacks on steroids made of stone.)
I would say that the main attraction to this special part of the planet is to see the temperate rain forests and to admire the many ancient as well as newly-forming flora, especially the trees of this region. Douglas firs that have grown to 300 feet, imposing sitka spruce, giant hemlocks, radiant viny maple trees, red alders – each species with its own aura and influence.
There is virtually no piece of ground uninhabited in the dense and complex forest community I’ve seen. Plants grow on top of plants, and are called epiphytes: lichen and moss and ferns, spreading alongside seedling trees on “nurse logs”.
It is a great privilege to stand in the midst of such an ancient phenomenon existing in our present day. In one way, I felt insignificant, a small human, in the presence of arboreal majesty, but in another sense, I know that my human awareness and appreciation is what protects these old forests from incursions.
Hurricanes and earthquakes may create huge upheavals around the globe, but here it is a great honor to witness the stalwart features that are continuous – mountains, oceans, and old- growth forests. 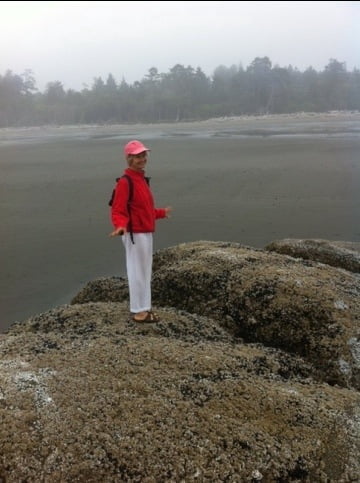