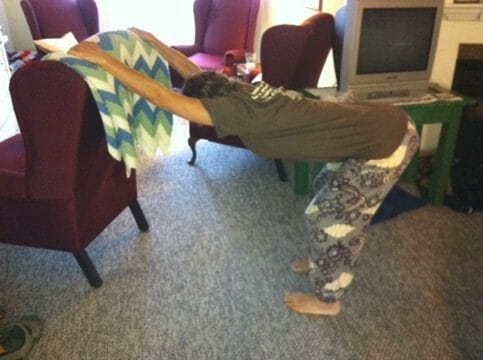 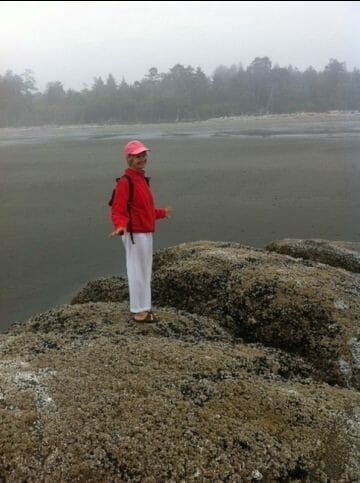 I’m on the opposite side of the continent from the battered U.S. Eastern seaboard, afflicted as it has been by Hurricane Irene. I’ve been sheltered for the last two days in the Olympic Wilderness area of Washington State.
My awareness has been opening to include the destruction, even death, on the East coast, even as I take in the awesome magnificence of where I am at the moment.
As a launching pad for appreciating the one-million acre Olympic National Park, I am lodged at rustic Kalaloch with it’s expansive sandy, log-jammed beach. There have been so many first sightings. […] 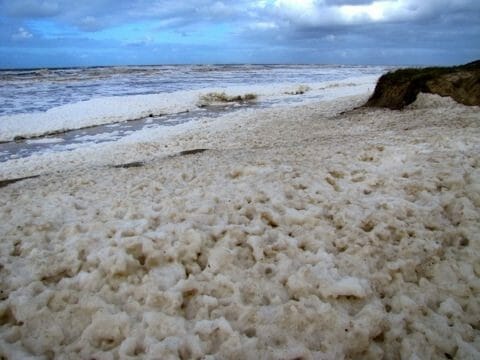 Have you got the habit of saying proper good-byes?
My sister passed away 13 years ago. I knew when I left her at her home in Ohio as I returned to Australia that I would never see her again. Everything I had to say I had said in words and embraces over the two terminal months I spent with her. I guess that’s what I call a proper farewell. Emptying out of all the things you want your loved one to receive from you because you may not have that next chance.
Humans are funny creatures, rather deluded really. […] 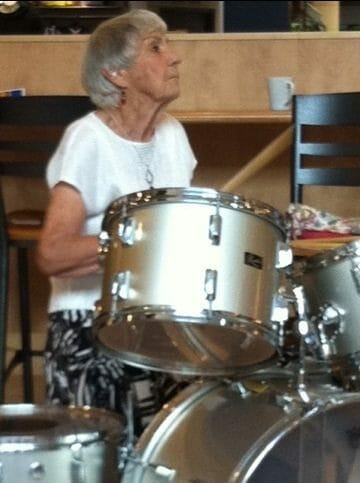 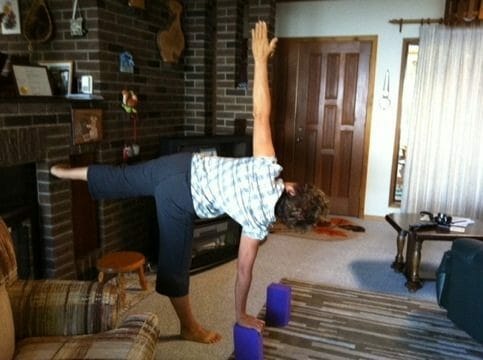 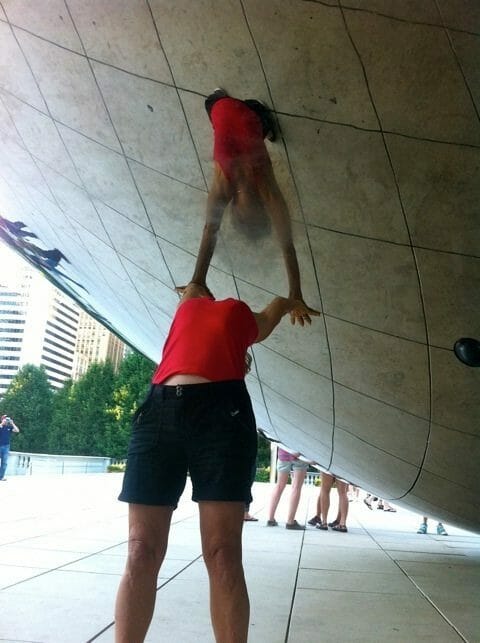 I’ve noticed that the practice of yoga can become addictive for some, especially those personalities who have that little bit of a tendency to get obsessive about things.
That would be me.
When I discovered Iyengar yoga in 1979, I would sometimes attend a couple of classes a day, would attend classes every day, except Sunday, and did a teacher training course only five months after my first class.
I learned a lot. There’s a narrow line between passion and obsession. […] 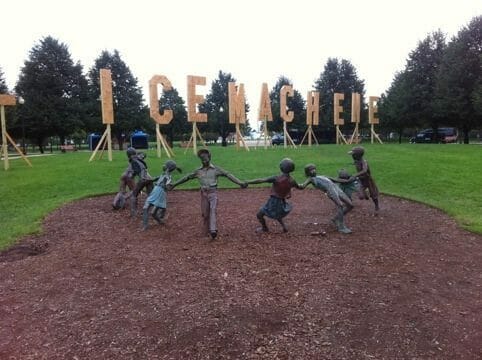 Getting Familiar with Family

The refinement of yoga practice isn’t necessarily the perfection of an advanced pose like Dwi Pada Viparita. For my money, mature yoga practice derives from the expression of yama and niyama – the “thou shalts” and “thou shalt nots”..
Nowhere is the practice of concepts like “ahimsa” (non-violence) and “aparigraha” (generosity) more challenging than when we are relating to our families.
The original meaning of family goes back to servants/household/domestic. […] 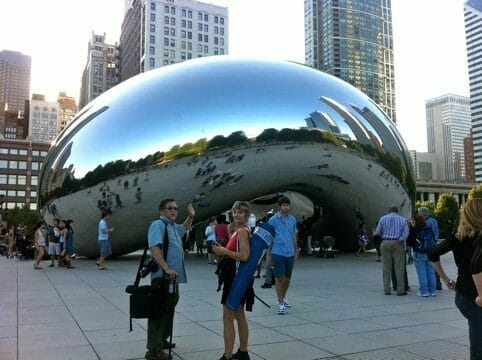 An ex-pat Filipino friend who has lived in Chicago for many years took us to see his favourite thing:

A sculpture by Anish Kapoor, “Cloud Gate”, is made up of 168 highly polished steel plates with no visible seams. It weighs 110 tons; think gi-nor-mous. The sculpture is situated in Chicago’s beautiful Millenium Park.
More important than any of its vital statistics is the way the public is drawn to this shiny feature, like latter-day Narcissuses trying to discover themselves in warped reflections. […] 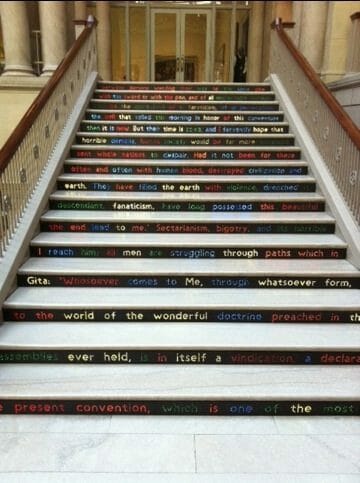 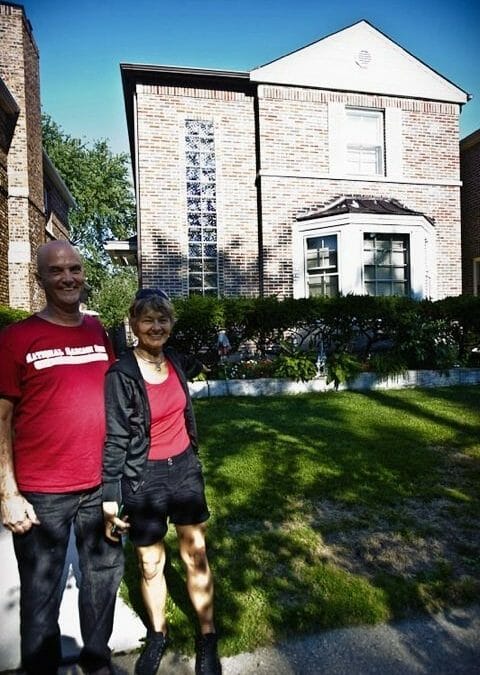 You Can Go Home Again

And I did yesterday, “home” being a two-story brick dwelling on the edge of fashionable Oak Park (Chicago), which my family moved from in 1959.
The current owners, Mr. & Mrs. Comancho, answered my door knock, and, remarkably, let us strangers into their home. They are an elderly Mexican couple, Chicagoans since the 1920’s. When I was growing up in this neighborhood, it was multicultural, but upwardly mobile, populated by lawyers and doctors, like my dad.
It’s a true experience, that one’s childhood home looks small compared to the memories we hold. […]

From Clay Tablets to iPads

King Tut is getting around a lot these days via traveling exhibitions. I’m talking of course about Tutankhamen, the boy king of ancient Egypt.
I know a bit more about him from having seen his personal effects and mummified remains in an exhibition in Tucson the other day. The many artifacts on display were reproductions, including jewellry, chariots, weapons, oil lamps, and many statues representing icons and idols. Two of the statues portrayed scribes – individuals who plied a much respected profession in Tut’s time. […]

Not a typical holiday destination, but I’m here doing my familial duty – accompanying my sister to her pre-op visit to the orthopedic surgeon.
I don’t mean to be voyeuristic; this is a scary and intensely emotive time for my sister.
But I’m a yoga therapist at heart, I guess. So, I’ve read the xrays with interest. A scoliatic spine unfortunately adds complications to a ruptured disc and disc degeneration. […]