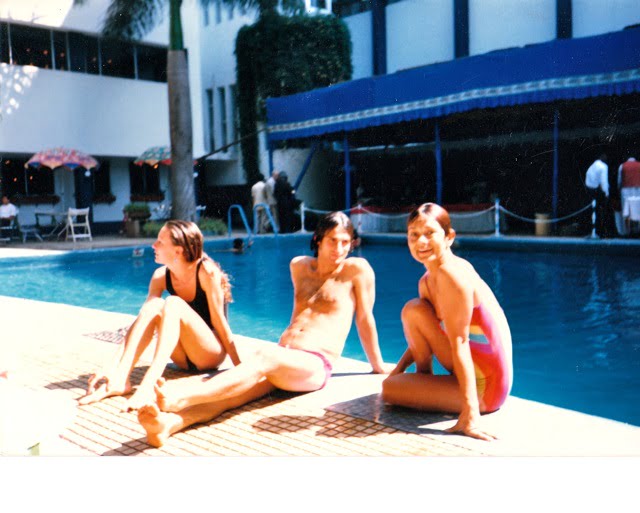 Eve in Pune 1986 with Simon and Louise

I was enjoying listening to the Dixie Chicks this morning on my iPhone while working out with some free weights (yes, I do weights sometimes and yoga). If you haven’t heard of the Dixie Chicks, I’d be very surprised because, as of 2010, they were rated the top selling female group in the U.S.
They also had one heck of a defining moment in their music careers – one of those “S” bends that shows who you are and possibly spins you off in unforeseen directions.
In 2003, on the cusp of U.S. invading Iraq, lead singer Natalie Maines voiced her rejection of this war and said “we’re ashamed that the President of the United States is from Texas” (their home state).
In no time flat, the group lost half of their American concert audience and the ensuing controversy led to hate mail and death threats. Rather than apologise, the women came back with their hit song, “Not Ready to Make Nice”, and later the documentary “Dixie Chicks: Shut Up and Sing”.
I think it’s possible to have several or even many defining moments in one’s life. I had one in 1990 when I decided to leave the B.K.S. Iyengar fold, which I’d been part of since studying with Martyn Jackson in 1979. While I never was taught by the great guru directly, I was a student at the Iyengar Institute in the 80’s when Mr. Iyengar oversaw the classes that his progeny, Prashant and Gita Iyengar, taught. Mr. Iyengar was often offended when he observed students doing poses badly and would confront them with verbal and sometimes physical abuse. There were horrible stories told over the years of Mr. Iyengar slapping and kicking students in classes and intensive courses, with much defense of his behaviour from his most loyal students, and even from the guru.
It was hard rejecting Mr. Iyengar as my teacher because I seemed to be going against the better judgment of a whole lot of my friends and colleagues. I sometimes doubted that I had made the right decision or even assessed the situation accurately. In the end I went my own way, although I have been profoundly influenced by the Iyengar method and I appreciate and respect many Iyengar teachers.
Another of the Dixie Chick’s songs is called “So Hard” with the lyrics: “It’s so hard when things don’t come easy….” which, after all, is the very definition of a defining moment.