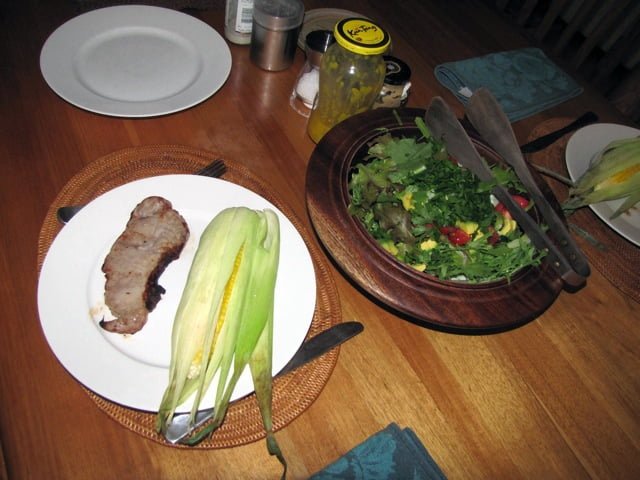 I wish I had a dollar for every time that I’m asked out for dinner at someone new’s place and they say, “But you don’t eat meat, do you?” The assumption being that if I’m a yogi, I don’t eat animal foods.
Yes I do. There it’s out. As much as I admire people who have foresworn eating meat, especially if they are thinking of the slaughtering of  innocent sentient beings, I haven’t renounced a meat diet.
Actually I’ve come full circle. I was born in and grew up in one of the meat capitals of the United States – Chicago. My birthplace was called The Hub because railway lines carrying cattle to the abattoirs and meat packing companies all converged in Chicago. My maternal grandfather made his fortune from the meat packing industry. Chicagoans have to be among the most meat-oriented connaisseurs in the world.
As my interest in yoga developed, I decreased my meat consumption, little by little. Then I met Daniel and his son Ben, now my husband and stepson, respectively. When we all moved in together, I didn’t want us to be eating two different meals at the same table, and Ben was a growing boy, so I gradually increased my meat consumption. This probably didn’t hurt my overall wellpbeing as I was still menstruating at this time.
When I underwent surgery 3 months ago, I lost a fair bit of blood, needed to be transfused, and still my hemoglobin count was scarily low. I’m taking a good slug of iron each day, but I’m pretty sure my levels are not normal as yet.
Did I spurn the big slice of steak Daniel cooked for dinner tonight? Not on your life 🙂